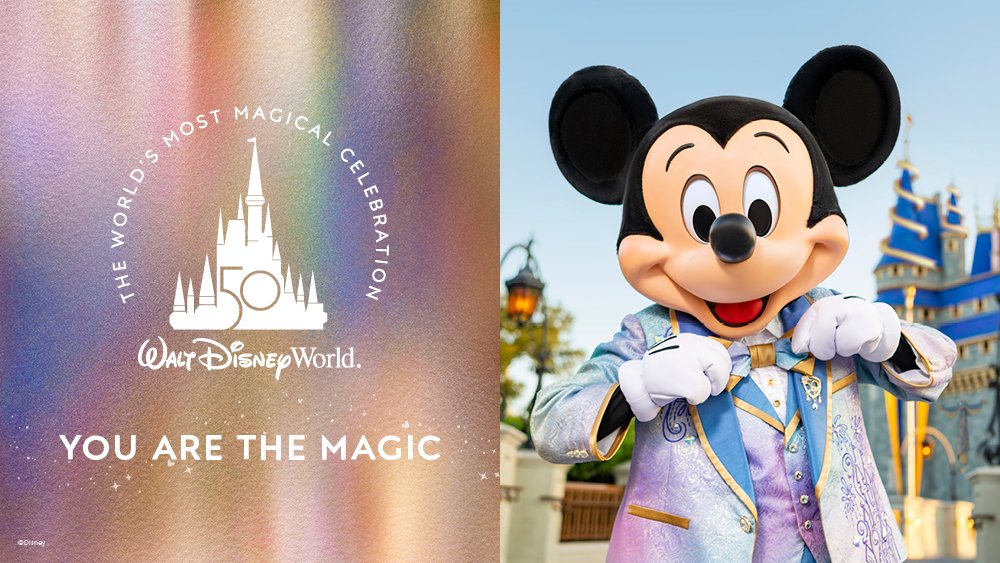 With so many changes at all of Disney’s destinations in 2021, it’s hard to imagine more are on the horizon, but Disney means to keep alive Walt’s vision that “Around here, however, we don’t look backwards for very long. We keep moving forward, opening up new doors and doing new things, because we’re curious…and curiosity keeps leading us down new paths.” 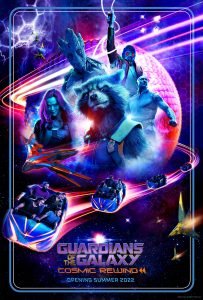 We can’t wait for it to be “Save the Galaxy” time!

2) Star Wars: Galactic Starcruiser’s First Voyage on March 1
This first-of-its-kind vacation experience goes beyond anything Disney has created before. Guests will become the hero of their own Star Wars story during this two-night adventure, traveling the galaxy in style aboard the Halcyon Starcruiser and eventually making their way to the Outer Rim for a planetside excursion to Batuu. You choose how to make your way in the galaxy – maybe as a member of the Resistance or by learning the ancient ways of the Jedi lightsaber. Maybe you prefer loyalty to the First Order or the excitement of living life like a smuggler? The decisions are up to you. During your voyage, you won’t just meet new and familiar Star Wars Characters, you’ll interact with them in ways you’ve only imagined. They need your help – you’ll assist and even join them on daring missions.

3) Disney Wish
The inaugural sailing of Disney’s newest ship, the Disney Wish, is June 9, 2022, and with it Guests will see some of the most advanced technology and storytelling magic on the high seas. Check out the new world that awaits just for you:
• The AquaMouse – the first Disney attraction at sea, 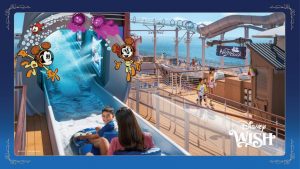 will immerse families in “The Wonderful World of Mickey Mouse” animated shorts. Complete with show scenes, lighting and special effects, and splashtacular surprises, this first-of-its-kind water ride will send Guests on an adventure through 760 feet of winding tubes suspended high above the upper decks. 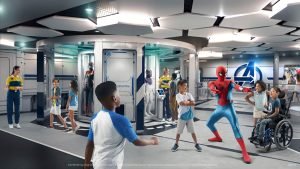 Avengers headquarters where young “recruits” will train to be the next generation of Super Heroes with the help of their own heroes, like Spider-Man, Black Panther, Ant-Man and the Wasp.

Fairytale Hall is a royal trio of activity rooms where princesses and princes will let their creativity shine at Rapunzel’s Art Studio, read and act out stories at Belle’s Library, and test newfound icy powers at Anna and Elsa’s Sommerhus.

Walt Disney Imagineering Lab is a first-of-its-kind opportunity for kids to discover the secrets of Disney Imagineers with hands-on activities and inventive experiments.

For the littlest cruisers ages 6 months to 3 years, It’s a Small World Nursery will offer babysitting services in a whimsical environment inspired by the beloved Disney attraction of the same name.

Edge (ages 11 to 14) and Vibe (ages 14 to 17) are trendy hangouts where tweens and teens will chill and play in their own way, with dedicated programming designed to engage the unique interests of these age groups.

With the debut of three new family dining concepts, dinner on board the Disney Wish will be so much more than a meal – it will be a chance to interact with favorite Disney stories in exciting new ways.

Arendelle: A Frozen Dining Adventure is 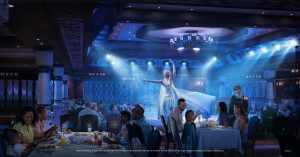 Worlds of Marvel is the first-ever Marvel cinematic dining adventure, where Guests will play an interactive role in an action-packed Avengers mission that unfolds around them, complete with a worldly menu inspired by the Marvel Cinematic Universe.

1923, named for the year The Walt Disney Company was founded, is an elegant celebration of the company’s legacy, paying homage to the golden age of animation and offering a tasteful tribute to its Californian heritage with dishes inspired by the state’s unique fusion of cultural flavors.

Adults can indulge in sun-drenched serenity at Quiet Cove, a peaceful refuge set away from the bustle of family activities, featuring a luxurious infinity pool, poolside bar and chic cafe. Or relax at Senses Spa, a tranquil oasis offering indulgent spa and beauty treatments, drawing on the serenity of natural elements to promote pampering and relaxation. For the first time on a Disney ship, uests will embark on a space-jumping tour of the Star Wars galaxy at Star Wars: Hyperspace Lounge, a richly themed, immersive experience reserved for adults every evening, offering interactive tasting experiences and signature beverages inspired by destinations such as Batuu, Tatooine and Mustafar.

Savor adult-only dining with gourmet meals and exceptional beverages inspired by the elegant icons of Walt Disney Animation Studios’ “Beauty and the Beast.” Palo Steakhouse combines the relaxed sophistication of authentic Italian dining with the classic refinement of a modern steakhouse in a genteel setting inspired by Cogsworth, the tale’s majordomo-turned-enchanted-clock. Enchanté by Chef Arnaud Lallement will offer the most luxurious dining experience on board, featuring a gourmet menu crafted by the three-Michelin-starred chef. This romantic and intimate venue evokes the dazzling spirit of the film’s candelabra maître d’, Lumiere. The Rose is a chic lounge at the entrance of Palo Steakhouse and Enchanté. Inspired by the fateful flower at the heart of the story, The Rose will be an idyllic setting for a pre-dinner aperitif or after-dinner cocktail. Other adult-exclusive spaces on board the Disney Wish will include a variety of gourmet cafes, relaxed bars, upscale lounges and more.

4) “Fantasmic!” will be returning to Disney’s Hollywood Studiosin 2022. When this incredible spectacular reopens, it will incorporate an all-new sequence featuring live performers, stunts, special effects and more! This is one of our favorite nighttime shows, so we can’t wait to see the enhancements!

5) Disney Adventure Friends Cavalcade
We think the new character cavalcades are a fun and different way to see lots of characters, so we’re looking forward to the newest 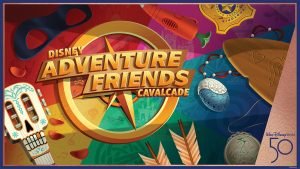 addition, the Disney Adventure Friends Cavalcade. Embarking on a great journey through Magic Kingdom, the Disney Adventure Friends Cavalcade will feature the most characters of any cavalcade to date, including Nick and Judy from “Zootopia,” Baloo and King Louie from “The Jungle Book,” José Carioca and Panchito from “The Three Caballeros,” Miguel from “Coco,” plus Merida, Moana, The Incredibles and so many more! 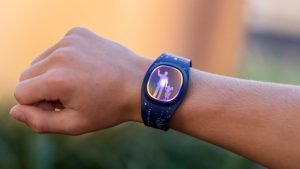 California, the next-generation MagicBand+ wearable technology will do more than just make your experience more convenient. MagicBand+ will unlock new moments of magic, allowing you to engage with favorite Disney moments in new ways, including:

7) “Finding Nemo: The Big Blue… and Beyond!” At Animal Kingdom, a new Finding Nemo show debuts, set in the timeline of the movie “Finding Dory.” The show tells the story of Nemo and how all the characters got there, incorporating many of the beloved songs and production numbers from the original show.

8) “Mickey’s Magical Friendship Faire”
At Magic Kingdom Park, live entertainment returns to the Cinderella Castle Forecourt Stage, with a show newly enhanced for the 50thAnniversary celebration. “Mickey’s Magical Friendship Faire” will incorporate favorite scenes from the previous version of the show – with sequences inspired by “Frozen,” “Tangled,” and “The Princess and the Frog” – plus a new opening and a new finale with Mickey Mouse and all his friends in their sparkling, EARidescent fashions. The show will also include an all-new, original song entitled “Where the Magic Feels Like Home.” 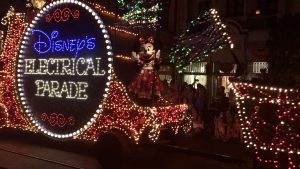 The Main Street Electrical Parade turns 50 this year and Disney is celebrating by bringing the beloved classic back to Disneyland. This is one of our favorites – we would love for it to return to Walt Disney World!

10) Continuation of the World’s Most Magical Celebration
Disney’s 50th anniversary celebration began Oct. 1, 2021, but the party continues for 18 months, so there is more to come in 2022! We can’t wait to see what surprises are still in store!

Ready to start planning? Email us or click below to fill out a short form, and a Neverland Adventure Guide will get back with you shortly!