Star Wars Galactic Nights – an OUT OF THIS WORLD party! 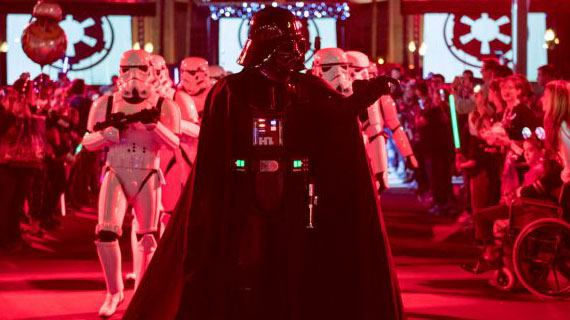 Like many of you, my family LOVES Star Wars! When I realized we would be at Walt Disney World in December at the same time as a special one-night event featuring Star Wars, I decided to surprise my family with tickets. And Star Wars Galactic Nights at Disney’s Hollywood Studios did not disappoint! And you’re in luck because Disney has announced a return of the Star Wars: Galactic Nights special event on May 27, 2018! And it’s not too late to let us help you plan a trip!

Let me tell you a little about the adventure we had that night. When we a 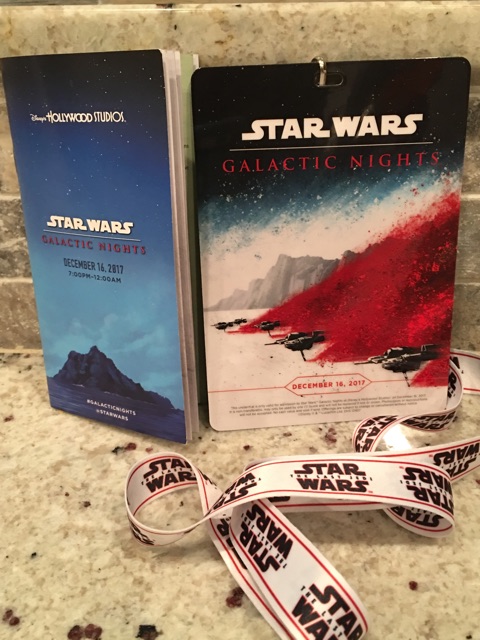 rrived, we were given our “ofﬁcial” keepsake credentials and the program for the night. The program included a schedule of Star Wars entertainment, a map of character greeting locations and attractions, specialty food and beverage options and exclusive event merchandise.

One of our favorite parts of the night was the Seize the Saga Scavenger Hunt. We were given a mission to visit eight different photo spots on “planets” throughout the park to collect stickers to add to the back of our credentials, which formed a cool Star Wars picture.

Because this is a special event that required the purchase of tickets, we were pleasantly surprised with very short wait times for the eight attractions that were open! We were able to walk right onto Star Tours and Toy Story Mania with no wait; while Rock ’n’ Roller Coaster had a short line because it was special for that night – Rock ’n’ Roller Coaster: Star Wars Edition! It had Star Wars music playing and lots of Star Wars images throughout the ride. And the outside of Twilight Zone Tower of Terror was covered with Star Wars projections and videos.

The entertainment was our absolute favorite part of the party! We especially enjoyed Inside Star Wars: Galaxy’s Edge because we learned so much about the new Star Wars-themed land that is being built at Disney’s Hollywood Studios. There was a panel of team

members from Walt Disney Imagineering and Lucasﬁlm that shared secrets and progress of Galaxy’s Edge, the new land that will open in 2019. Other entertainment that was offered included an Imperial March; Jedi Training: Trials of the Temple; DJ Dance Parties; Star Wars: A Galaxy Far, Far Away stage show; and Star Wars: A Galaxy Spectacular, which was truly one of the best ﬁreworks shows we have ever seen!

If you are a Star Wars fan, don’t miss out on this awesome, rare opportunity to experience Star Wars Galactic Nights for yourself in May! Stay tuned for more details on this event – as well as dates tickets will go on sale.

About the author: Jennifer Lowery has worked as a travel agent specializing in Disney travel for the past seven years. She has visited and planned trips to all of the major Disney destinations, including Walt Disney World, Disneyland, Disney Cruise Line, Aulani – A Disney Resort and Spa, and Adventures by Disney. She is based in Arkansas, but plans trips for clients all over the country. Jennifer would love to help your family with a MAGICAL trip, too! Email her at jennifer@neverlandadventureguides.com.